Mass Broadband and WiredWest have a 'good meeting' in Boston after public conflict by Mary Serreze, Mass Live

Mass. Broadband on July 30 issued a policy that individual towns must retain title to their own broadband infrastructure. WiredWest then apparently continued to advance its plan for collective ownership, as reflected in its business plan and operating agreement released in October and November.

..."Ownership of the network does remain the biggest sticking point," he said. "But the good news is that the board of Mass. Broadband agreed to take another look at the ownership issue. That's big."

Even for those of us living in metro areas that have comparatively high speed access, we don't have a real choice in providers and most of us lack access to next-generation gigabit speeds.

The big cable and telephone companies excel at restricting competition by manipulating markets, state and federal government policy, and other means. This is why so many local governments across the nation are themselves expanding Internet infrastructure: to ensure local businesses and residents can access affordable next-generation services and create a real choice. We should be encouraging these local approaches.

Schneiderman’s office suggests, if you find you are getting cheated by your Internet Service Provider, take the test, get a screen shot of it, and forward the screen shot to his Consumer Frauds Bureau, or call the Consumer Hotline at 1-800-771-7755.

The techie mayor who may be Tennessee's next governor by Nick Fouriezos, Ozy 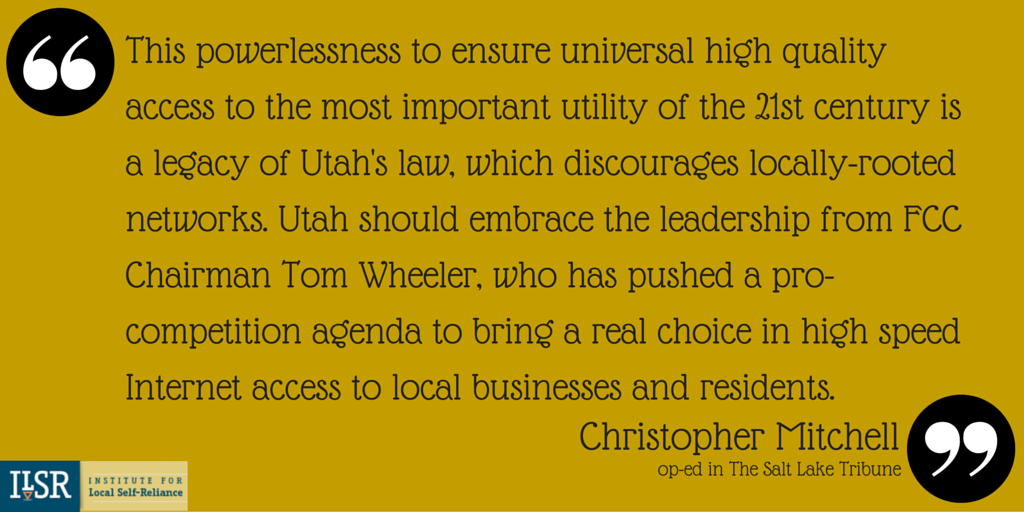 The more bits you use, the more you pay: Comcast CEO justifies data caps by Jon Brodkin, ArsTechnica

Big cable's sledgehammer is coming down by Susan Crawford, Medium

Don’t be fooled. The usage-based billing playbook was developed by the mobile wireless industry, which itself is nothing more than a duopoly (Verizon Wireless and AT&T) with a fringe of a few other firms with similar business models. I’ve been predicting for years that usage-based billing will be used as a sledgehammer by other internet access providers like Comcast. Unfortunately, it looks like I’ve been proven right.

The best way to stop Comcast's data caps from ruining the Internet by Brad Reed, BGR

Broadband funding: If you build a vision, it will come by Craig Settles, American City & County