Even as the Internet is changing every aspect of our lives and communities, most Americans are intimidated by confusing jargon and misconceptions about Internet policy. We are developing a series of fact sheets that make these issues understandable to everyone.

Stay up to date with these fact sheets and other developments in community owned networks, subscribe to our one-email-per-week list. Once a week, we send out an update with new stories and resources. Expanding Internet access to everyone who wants it isn’t an infrastructure problem alone. Achieving equity for everyone in a community is a many-sided endeavor, and requires engaging and activating an array of stakeholders. Created with support from AARP, ILSR’s Exploring Digital Equity Fact Sheet Series unpacks the issues, challenges, and opportunities today.

What is Broadband? [pdf] Cities across Ohio have expanded Internet infrastructure in thoughtful, forward-looking ways. These municipal networks have created local government savings, increased speeds, promoted service competition, and powered economic development. Some cities have specifically addressed the affordability gap in cities, where many residents have been left behind in a broken market where large Internet Service Providers (ISPs) have underbuilt networks, leaving hundreds of thousands of broadband-hungry Ohioans in the digital dust. This fact sheet outlines the many long-term benefits that municipal broadband projects have brought to the state. Municipal networks in the United States have proven that when dollars are invested in publicly owned information infrastructure, they often return value back to the community several times over. These networks are directly accountable to the community and have proved themselves for more than 20 years in some cases, bringing lower prices to households than the large private providers. Municipal networks and partnerships account for 9 of the top 10 fastest broadband networks in the nation. This new fact sheet highlights municipal broadband success stories from across the country and some of the many benefits the networks have brought to the communities they serve. Despite raking in hundreds of millions in government broadband subsidies, Frontier Communications has failed time and time again to bring reliable, high-speed connectivity to the rural communities it serves. Instead of investing in network upgrades, Frontier has neglected its rural infrastructure to the detriment of its subscribers and the company’s own financials, with its worsening service quality paralleling its plummeting stock value. This fact sheet presents evidence of Frontier’s negligence and suggests that rather than continuing to trust Frontier, government officials should look to publicly owned and community-minded providers to connect rural residents, businesses, and institutions.

The Opportunity of Municipal Broadband Next Century Cities (NCC) helps communities across the U.S. connect to each other, find resources, and discover ways to improve local Internet access options. NCC’s fact sheet uses examples from municipal network history. Communities have invested in publicly owned fiber optic infrastructure to obtain better connectivity and to reduce telecommunications costs for municipal facilities. In more than a few places, those investments became the foundation for what later became networks to serve local businesses and residences. The fact sheet also delves into other benefits, such as economic development, improved efficiency of other utilities, and accountability.

The Opportunity of Municipal Broadband [pdf]

A Pocket Guide to 5G Hype It’s difficult to separate 5G fantasy from reality as reported in traditional news sources. Misunderstandings surrounding the demands and capabilities of 5G has snowballed, creating an incorrect assumption that the technology will solve America’s many connectivity problems. It’s true that 5G is an improvement, but it has limitations. This fact sheet addresses the most repeated errors surrounding 5G and explains why the technology should be considered another tool, not an exclusive remedy. Local governments spend billions on all sorts of infrastructure every year to advance the public good for their communities. Roads and bridges keep day-to-day activity moving. Investments such as water and sewer infrastructure keep cities clean and livable. Fiber infrastructure is used for a wide range of purposes, including economic development, education, and to keep a city’s administration connected. To get a look at how fiber network infrastructure compares to other public investments, we've developed the Broadband is Affordable Infrastructure fact sheet. As interest in publicly owned broadband network infrastructure increases, local communities seek new ways to fund municipal networks. Revenue bonds, interdepartmental loans, and avoided costs have been the three most common methods for funding Internet network infrastructure, but local leaders are finding creative approaches to get the job done. In this fact sheet we analyze some new approaches to funding fiber optic infrastructure, pros and cons, and offer some examples.

Satellite Is Not Broadband As a nation our goal is ubiquitous broadband coverage so every person, regardless of where they live, can obtain the fast, affordable, reliable Internet access necessary for modern times. For people in rural areas, where large national wireline providers don’t typically invest in the infrastructure for high-quality connectivity, satellite Internet access is often their only choice. In this fact sheet we address some of the reasons why depending on satellite Internet access to serve rural America is a mistake.

Net Neutrality Repeal By The Numbers As the vote to repeal network neutrality protections approached in 2017, we started digging into the FCC’s data to determine how eliminating the policy would affect subscribers whose ISPs might take advantage of future changes. We learned that, due to existing monopoly and duopoly conditions, many millions of people would have no recourse but to pay known network neutrality violators for Internet access. We developed visuals and facts sheets with frank data that describes the problem in the U.S., California specifically, and on the East Coast from Maine to Virginia. The Federal Communications Commission (FCC) manages the CAF program, which provides billions of dollars in subsidies to Internet service providers for areas where the cost of building networks is prohibitive. Some large providers decided not to accept some of the subsidies during Phase I - about $198 million annually for 10 years. This fact sheet details the most important aspects of the Connect America Fund (CAF) Auction. What is it? What should it do? Who does it affect? When you think “municipal fiber network,” you may think Chattanooga or Wilson, North Carolina - places where the city utility offers retail services directly to subscribers. That’s only one of several possible models that are emerging as an increasing number of communities use publicly owned assets to improve local connectivity. This fact sheet offers five of the most well known models that local governments are investigating and implementing as they become more self-reliant. Examples and characteristics of each model help illustrate. The large corporate national Internet Service Providers seem to raise their monthly rates every year but don’t give subscribers anything more for their money. On the flip side, we noticed that municipal networks tend to increase speeds for subscribers with very modest or no price increases over long periods of time. In order to illustrate this phenomenon, we looked back in time at rates and speeds in eight Tennessee communities that have invested in publicly owned Internet network infrastructure. You will see how speeds have increased significantly, but rates have only inched up. The next time you’re attending a city council meeting, a local broadband initiative, or just chatting with neighbors about better local connectivity, take a few copies of our fact sheet. In addition to providing some basic talking points to get the conversation moving, the fact sheet offers resources to guide you to more detailed information on publicly owned Internet networks. You've already started to get people interested in all the advantages of high-quality connectivity, now show them how local self-reliance it the most direct route to better access. This fact sheet on municipal networks in Virginia describes how economic development, public savings, and better connectivity have contributed to the health of local communities with publicly owned networks. Virginia local governments have improved public safety, healthcare, and connectivity in local schools. Rural areas are better able to compete for high-tech and manufacturing jobs because high-speed connectivity is now an essential service for day-to-day business. 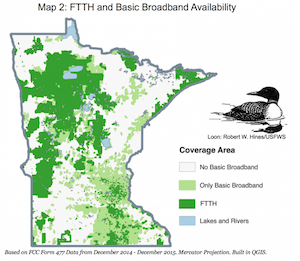 This fact sheet highlights the great work that Minnesota cooperatives and municipalities have done to bring fast, affordable, reliable Internet service to rural areas throughout the state. They've built many Fiber-to-the-Home (FTTH) networks, but there is still much work left to do. One in 4 Minnesotans lives in a rural area, and of those rural households, 43 percent lack access to broadband, defined by the FCC as 25 Megabits per second (Mbps) download and 3 Mbps upload. Resilient, robust, fiber is the long-term goal, but fixed wireless can help extend coverage in hard-to-reach rural areas. This fact sheet emphasizes the deepening divide between urban and rural connectivity. The fact sheet can help describe why people who live in the country need services better than DSL or dial-up. This tool helps to visualize the bleak situation in rural North Carolina, how it can be improved, and offers links to resources.

Communities across the nation have invested in publicly owned cable and fiber infrastructure. ILSR's Community Networks Map documents over 500 communities where municipal networks serve residents and businesses. This fact sheet provides a quick introduction to the interactive online map.

When a community decides it needs to establish its own publicly owned network infrastructure, one of the biggest challenges is financing the investment. Each community is unique but three main methods of financing are most popular. This fact sheet offers a quick look at these common approaches and provides real-world examples.

This is a handy resource for elected officials and activists that are confused by some of the jargon or just want to make sure they understand some key ideas around broadband and telecommunications. Though schools, libraries, and other community anchors need access to faster, more reliable networks, the big cable and telephone companies have priced those services so high that they are breaking the budget. But when communities create their own connections, affordable high capacity connections aren't the only benefits.

Wireless networks may appear to be magical, but are actually driving investment in fiber optic wires. This resource defines many terms, key points, common speeds, and offers insight into wireless technology and policy.

This 2 page fact sheet explores the issue of preemption - how at least 19 states have made it impossible or more difficult for communities to build their own networks. It includes some history, legal issues, and quotes from FCC Commissioners.